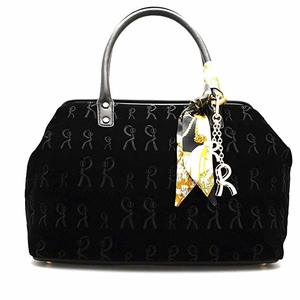 The perfection of the unforeseeable

"All colours are beautiful and look good together, because - if, for some reason, two seem to jar when placed next to each other - all one needs to do is to add a third and harmony is created. "
Giuliana Coen

Over the last fifty years, Roberta di Camerino handbags have played a leading role in the world of fashion. The bags themselves evoke stories, characters and emotion. The legendary Bagonghi bag, photographed in 1956 on the arm of Grace Kelly, toured the world with her. Other devote admirers include the likes of Elsa Maxwell, Princess Paola of Liegi, Liz Taylor, Gina Lollobrigida, Isabella Rossellini and Farrah Fawcett. Not forgetting the Caravel bag - carried on the arm of Madonna on more than one occasion.

The story of Roberta di Camerino, one of the great Italian fashion empires, begins with Giuliana Coen, the brand's innovative founder. The label's name was born by combining the name Roberta, taken from her favourite song "Smoke Gets in Your Eyes" and Camerino, her husband's surname.

Giuliana relied the extraordinary craftsmanship synonymous with Venice to create one of the region's only major brands. This craftmanship was mixed with the Neo-baroque style that would become her famous hallmark feature. "Soprarizzo" velvets woven in the dark on antique looms, until Roberta di Camerino were only used for furnishings and ecclesiastic robes. For the first time they were decoded in new colours on her creations. The claps and studs found on her bags were created by the craftsmen of brass ornaments for gondolas. These unique objects caused nothing like them had ever been created before. Roberta di Camerino's handbags proved to be a revolution, totally unlike anything made until that time.

An innovator, who wished to change the rules of fashion, she created bags made from narrow leather strips resembling shoe strings, interwoven and worked on looms. Objects that impacted the world of fashion with their unforgettable names (pirata, Casanova, Tranviere, Postiglione) and which continue to act as a reference point, both veiled and explicit, for all the most famous luxury brands of today. "The hanbag is being upgraded from the status of an accessory to that of a garment. It is always less casual, shunning the norm and refusing to tolerate anonymity. Credit for this re-evalutation of the handbag, making it a unique, luxury item, far removed from the monotonous cliché saddle-stitched-rigid-shoulder strap, goes, as everyone is now aware, to Madame Giuliana Camerino, who is gamering prizes, Oscars and awards for having created and continuing to create the most beautiful bags in the world", as Camilla Cederna wrote in "L'Espresso" in 1959. And, it was again Cederna who praised the Brigitte model: a velvet bag complete with an outside pouch in gilded metal that quickly became a best-seller worldwide.

In 1956 she received the prestigious Neiman Marcus "Oscar of Fashion" award. In the sixties, she was invited by Giambattista Giorgini to present her iconic trompe l'oeil effect pret-à-porter collections at Palazzo Pitti's Sala Bianca. Although she then went on to win numerous awards on an international level, it was thanks to the Compasso D'Oro award in 1979 that she entered the realm of creators who know how to revolutionize the quality of objects.

The consecration of her talent came in 1980 in the city of New York. The Whitney Museum of American Art dedicated an entire exhibition to her name. The exhibition documented the affection and high esteem that americans have for her work and art (in 1975 she opened a large boutique in New York on Fifth Avenue). Artistis of the calibre of Salvador Dalì and Giorgio De Chirico were her friends and recognized her enormous talent. The exibition also displayed sketches of both garments and scarves. These sketches remind us reminds once again how conceptual her design path has been.

Julie Gilhart, fashion director and senior vice president of Barneys New York, says that visiting the archive of the Roberta di Camerino brand is a truly incredible experience: "every bag that i know has already been made by her."
"The birth of a Legend"

Please scroll down to discover the story of the brand and the new collection.
Please note that WebGL capabilities are required.

"I went home with the stuff inside a headscarf. The next day I could not find anything else as nice or as cheap. I bought the leather, a ball of twine and a curved needle. In a short time I had my old bag again. One day a policeman stopped me on the train for smuggling."

"The woman who sold me the bag, accused me of smuggling accessories from Itay into the Swiss market. The newspaper published the story next day and I received numerous job offers. That is how I started sewing bags."

"I sketched a bag, and then another one and yet another one. I remember several boxes set and jewelry boxes, but what inspired me more than any other shape was the essential design of a doctor bag. I then thought about small buckles and belts."

"We made figured velvet for my bag. We could weave buckles and all the other decorations: I mean they would be part of the bag, but they would be an illusion, a trompe-l’oeil"
Check out
the new
collection